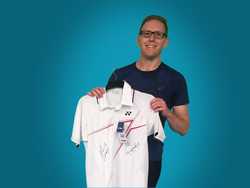 Jason, the winner & the Yonex shirt signed by Marcus Ellis & Chris Langridge
On a cold and frosty December evening 23 players from Oxon, Berks, London, and of course Bucks, converged on the Badminton Centre for our annual Xmas Singles Tournament. The venue was closed that week between Xmas and New Year but Badminton Wycombe kindly opened the centre for us.

Congratulations then to Jason, who received a Yonex sports shirt signed by Marcus Ellis and Chris Langridge.  Tim received a runner up prize of Belgium chocolates.

In the play off for 3rd and 4th place it was Toby who defeated Hari 21-17. Well done to Toby and also this was Hari's best performance to date in our tournaments.  The quarter final play-offs saw Bruce topping the group, Bruce 49pts, Nick 43pts, Chris 35pts and Stuart 35pts.